Home> Spy App Reviews> SpytoMobile Reviews 2022: Is It Worth Your Money?

SpytoMobile Reviews 2022: Is It Worth Your Money?

This article will be full coverage of what you need to know about the SpytoMobile spying application.

Various instances prompt you to use spying software. You could be tracking your phone to know where it is or that of a child growing up so fast. If you have a valid reason to spy on someone's phone activities, here are SpytoMobile reviews.

We will shed light on what it is and what it entails. You will also know how to access the SpyToMobile services via the website and the various pros and cons you will likely encounter as you use it.

SpytoMobile (also known as Spy2Mobile) is spying software that helps in collecting phone activities before syncing them to an online control panel. It allows you to view phone activities while away since the dashboard is online.

The app claims to offer services worldwide, and it supports more than 15 languages. So, anyone who needs a spying application to monitor their kids, employees, or spouse is welcome. Once you install SpytoMobile on the targeted phone, the next part is accessing the features on the online dashboard.

Some of the announced features here include calls, messages, and GPS location. We will shed more light on the functionalities as we proceed. While you can use it on different phones (Android and iOS), you need to check the laws regulating spying techniques.

You can use this software on family, friends, and employees. Spying on anyone outside that scope requires legal authorization to prevent being on the wrong side of the law.

Part 2: What Can I Do with SpytoMobile Features?

Once you are SpyToMobile, you get the following functionalities:

It seems like SpytoMobile may not be sophisticated, but it delivers basic data from phone activities. The best use-case scenario is when you need to know the current and past locations of the device.

SpytoMobile works on Android and iOS devices from the earlier versions to the latest. You need to root or jailbreak the devices, respectively, to use it. The bright side is that you will get all the fetched information exclusively.

The dark side is that the device owner will notice the change on the phone. So, the application does not offer complete stealth mode.

People have been saying both positive and negative things about SpytoMobile. Out of 40 reviews, half of them (50%) are positive, while the rest are middle and negative. At an average rate of 4.1, the application fairs well.

Here is an overview of the customer reviews and what they are projecting about the spying application.

"SpytoMobile is a good spying app and not an expensive alternative for other better-known applications used for monitoring a cell phone. I used another application for some time, but I was not happy. It was more expensive, and they even charged me after I canceled the service. I wanted to use Flexispy, but their complete software for Android is almost 400$, so I did not get to try it. SpytoMobile was good for me. Their support team is also ok. They even transferred a license from a phone I wasn't using anymore."

"I tried to use this app to track my children's iPhones. Guess what a surprise! 1st they charge your credit card, and later when downloading the application, even though you have the username and password, there is no access to the phone. The only option is to make your children aware that you're trying to track their phones. Later when you want to recover your money for no service, they just deny giving a refund because..."

SpytoMobile has poor customer support. After a while, they can respond to your questions, but you don't get answers if you have a problem with features not working or wanting your money back.

Part 5: How Much Does SpytoMobile Cost?

Using the SpytoMobile application will cost you 0.99€ per day for one phone. So, you can multiply the price by the number of phones you want to spy on. If you pay more, there are bonuses.

NB: Once you create an account, you get 3€ for testing purposes.

Price review: The price is quite fair since it will cost you about 30€ per month for one phone. If you pay the amount, you will get 10€ as a bonus. While the price is straight to the point, it's too much for spying on just one phone, and not many people could spend such an amount just to spy on a few phone activities.

Part 7: How to Use SpytoMobile

Step 2 Set up the Tool

Before installation, you need to root or jailbreak the device. After installation and confirming your registration, the app will hide. Visit your account online and go to the dashboard. 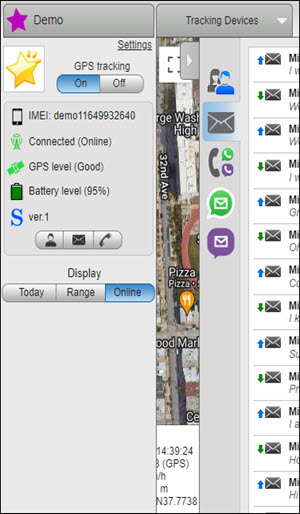 The procedure is easy, but it's not straightforward. The application you get on the stores does not have the name 'SpytoMobile', which can be confusing. Before the setup, you need to have rooting/jailbreaking knowledge.

The application loads fast if you have a proper internet connection, but the UI needs polishing if you compare it with the recent applications.

If we compare SpytoMobile with Spylix, we get the commonalities and differences.

Spylix has several advantages that make it favorable when compared to SpytoMobile. After testing, we found that:

Like Spylix, SpytoMobile works on both Android and iOS devices. There are more features in the prior, though.

Yes, it's legit. It's among the Spylix list of verified applications to spy on mobile phones. Some regulations govern the use of such apps. Therefore, you should know what the local rules say about spying applications in general.

It has a stealth mode, which means the targeted phone's user will never know whether SpytoMobile is installed. You have to activate the hiding in Android 2.x and 4.x versions. For Spylix, it's automatic when you install or set it up online for the iOS case.

Does SpytoMobile Have a Trial Version?

SpytoMobile gives you 3€ to test the application after creating an account. They give you the trial before asking for the 0.99€ per day for one phone. If you use Spylix, you get a 14-day trial period.

You can use the application to monitor more than one device. Like Spylix, you can add a phone, but with different methods. Spylix will use a user-friendly wizard to add the device. For SpytoMobile, you have to navigate to somewhere on the top-left of the dashboard.

Will SpytoMobile Work Anywhere in the World?

SpytoMobile and Spylix work worldwide. They are both supported in more than 180 countries, and all you require is an internet connection to access a phone's information. The only restrictions you may get to not using the app are from the laws and regulations governing a region or country.

We have come to the end of the SpytoMobile reviews, and there are some things to note. It's a diverse application that works on Android and iOS environments, requiring more features. If you compare it with Spylix, some work is still to be done.

On the better side, it has a good phone tracking ability, and it can fetch information from primary phone users. You may want to use SpytoMobile if you are mainly interested in location tracking and getting a few things from the call list and the messages.

If you want more features via a simple installation procedure, consider Spylix as the better spying tool.