The internet is flooded with parental control apps nowadays, and with so many options, it's easy to get confused. One particular app called Spyic has been quite popular amongst the community, and if you have been searching for a Spyic Review, you've come to the right place.

In this article, we will explore everything from various features to compatibility issues and subscription plans. So read on as we conduct an in-depth analysis of Spyic.

Spyic is one of the more well-known phone monitoring apps and is geared toward parents who want to keep a watchful eye over their children. The app has been featured on several other platforms such as PC World, and CET and has users in over 190+ countries.

The app allows parents to monitor their kids through a dedicated online portal that provides updates relevant to the target device. Many parents look towards apps like this due to the ever-rising danger of cyberbullying and online abuse.

Parents need to protect their children. However, they don't want to restrict their children from using modern tech devices that connect to the internet, which leads them to an option that works best for everyone, a monitoring app for underage kids.

Spyic works on both Android and iOS devices and has several features under its umbrella. We will be discussing further down below.

A list of features Spyic has to offer are as follows:

Spyic is compatible with both Android(4.0 and higher) and iOS devices with version 7 and up. It also doesn't need root or jailbreak to function for its core functions.

In addition, the online portal works on any modern browser accessible on a standard Windows and Mac desktop.

Spyic is not much popular with the users with significantly bad reviews across all review platforms. We will highlight what customers have to say regarding the renowned Spyic application.

"I can finally control my daughter’s phone usage. She used to chat during sleep time, but Spyic has helped me deal with that. Spyic is really an awesome monitoring app for parents. I will recommend it to my colleagues"

"A real scammer avoided them. I installed it and it didn't work. When I asked for a refund they denied my request. And when I made my review in this very Trustpilot they went along with them and removed my review and I’m doing it again one more time! "

Do not expect a timely back and forth from Customer Service if you live anywhere in North America.

Part 5: Is Spyic Really Worth The Money?

Spyic offers separate pricing plans to track Android and iOS devices. You can check out the packages in the tables below:

The prices are a little on the higher side of the spectrum as we can see that it's above most apps in this category. Unfortunately, iOS devices also lack a basic plan, and users will have to pay for a premium one if their target device uses iOS.

Part 7: How to Install Spyic?

As Spyic expects parents of all kinds to install the monitoring app, they have made the process incredibly simple and can be done in only a few steps.

Make sure you have an email address which you can access and receive emails from. Then, use that email address to create an account on Spyic. 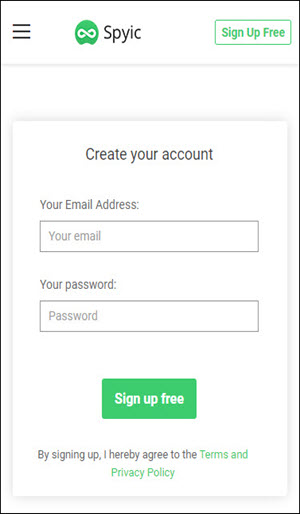 Check if the target device you want to monitor either runs Android or iOS and then navigate to the relevant pricing tab. In the subscription menu, assess your requirements and then make a choice. Next, all you need to do is follow the simple installation prompts and set up the target device. 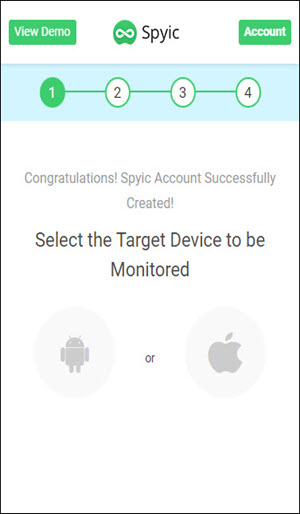 Once the monitoring app has been installed on the target device, you can monitor through the dedicated online portal. 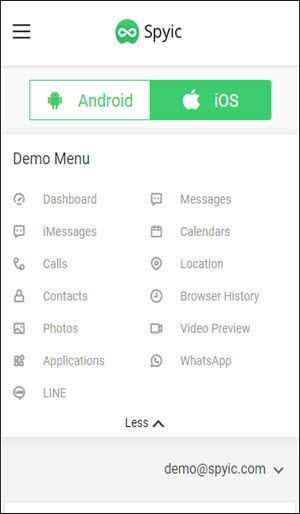 Comments on the process

The installation process is pretty straightforward, and people without even a little tech knowledge can follow easily through the installation prompts. Then, in only a couple of minutes, you will have your target device ready to be monitored.

3. Why Is Spylix a Better Option Than Spyic?

Part 9: What Should You Know about Spyic?

Spyic is not free, and users will have to buy a subscription to avail its features. However, there is a demo available on the website that can be used to have an idea of how the online portal works.

Similar to Spylix, Spyic on iOS devices is utterly undetectable as it uses iCloud's features to fetch data. However, the Android version of Spyic does require an app to be installed, and although there is a stealth mode available, a phone format can easily remove the app.

Users also should note that some of the Spyic features are locked behind jailbreak and root requirements, whereas Spylix works completely without the aforementioned requirements.

Turning off stealth mode will require a lot of tech expertise which the children simply do not have. Most children will not even be able to tell if a monitoring app has been installed on their device. So no, a child cannot turn off Spyic as the stealth mode prevents it.

Just like Spylix, Spyic also has social media monitoring, and parents can check the conversations of each of these apps along with their relevant timestamps. In addition, Spyic also allows parents to access the media in these conversations, such as photos and videos.

Monitoring apps are an important part of parenting in some cases, and we hope we have painted a clear picture for you in terms of Spyic.

In the conclusion of our Spyic reviews, all we have to say is that before choosing a service, make a list of your requirements and see the features that you need. Then see the price to value ratio of subscriptions and once you are sure of these two things, go in for the purchase.