TheOneSpy Reviews 2023: Can the App Suit Your Needs?

In the present time, spying applications are the ones that are gaining the attraction of the audience due to their specific features. To fulfill all the needs related to spying the internet has provided a lot of options for the audience.

After looking at different options of spying tools TheOneSpy is considered to be one of the most amazing tools. It provides different options to its customers related to cell phone spying of the target person. All you want to know about features, functionalities, pros, and cons, and its comparison with its competitors are available in the given TheOneSpy reviews.

Part 1: What is TheOneSpy?

The world has so much groomed and advanced that it is now not possible to believe anyone, even our own partner. Hence, there comes a need for a platform for keeping an eye on the employees, children, or partners to remain aware of their acts. We can easily keep an eye on the activities of a particular device with the help of a web portal.

TheOneSpy is the best platform for such a purpose and it proves to be very beneficial for the people who are conscious of the activities done by their partner or child and want to keep an eye on them. We don't have to do much effort to use it but only have to do some simple steps that we are going to discuss in our given TheOneSpy review.

By using the TheOneSpy app, we can not only examine call logs and messages on the target device but can also allow having data about social media accounts and live streaming also. The main reason for its popularity is its performance and reliability which forces users to use it rather than selecting any other third-party service.

There are certain functions of the TheOneSpy app that contributed to making it a reliable and well-known service. Some of the features occupied by it are given below:

We have noticed that people can extract data about someone else's social media accounts. This can be easily done by using the TheOneSpy app. We are allowed to examine all the message received or sent by any social media platform.

The most amazing feature of this app is that we are allowed to record as well as view the live streaming easily from a 360 angle. Hence, complete details about live Streaming will be provided on the TheOneSpy dashboard.

We can also track the location of a specific device by using this app. The GPS tracker of the app helps us to extract data about pinpoint location, location history, and route maps also.

The first thing that a person first examines about other devices is the call logs and contacts. TheOneSpy lets us know about all the call logs on the target device and also allows us to record the live calling.

Data about the lock screen password of the target device including pattern or digit will be provided to us so that we can completely keep an eye on it. Moreover, we can have messenger or email passwords easily by using the TheOneSpy app.

Live recording of the screen of the targeted device is a very unique feature of the app. The complete video visuals will be transferred to the TheOneSpy dashboard and we will also be able to record the live activities on the device.

TheOneSpy is an amazing tool that provides marvelous compatibility with Android, iOS along with Windows devices. The compatibility of this tool is quite a well-known feature and has become the cause of its popularity. The other side of the story is that it requires jailbreaking for iOS devices while TheOneSpy Android devices don't need any rooting or jailbreaking.

Part 4: What Does the Customer Say about TheOneSpy

This section contains authentic TheOneSpy reviews of customers. It covers the positive and negative effects that have been experienced by the users. The application has gained 55% good reviews with an average rating of 3.42.

"I tried this app a number of times for my kid's safety online and it really works. First I thought that it was not working because I have read a couple of bad reviews, but finally, it was the opposite of the negative reviews. Highly recommended to all of you. Moreover, the customer support is also very helpful."

"This app could be great but half of the time it is not loading correctly and the customer service is a joke. They tell you every time just wait and it will work for you which is a straight lie. They have severe Network and Data Base problems and the one guy or girl Millow what is the customer service doesn´t give a dime..."

The customer service is not very good as it should be. They blame the customer or the device if they complain about an app not working issue. Refund requests are avoided and do not respond to emails.

The subscription plan of this tool is quite different from its competitors. Different features are specifically available in different plans according to the desire of the customers. There are separate plans for Android users while iOS users are entertained with separate plans. A user must acknowledge that it is quite expensive in its plans as compared to Spylix which is providing more features.

As we know, there are always two sides to a picture, the first one is bright and the other is dark. Similarly, there are certain benefits as well as drawbacks of using the TheOneSpy app for keeping checks and balances on a particular device. The given are some pros and cons of the TheSpyOne app:

Part 7: How to Install TheOneSpy?

The appealing fact about this app is that users don't have to do lots of effort to keep an eye on a device but only three to four steps should be followed for TheOneSpy Login:

The first step includes visiting the official website of TheSpyOne and then moving to the main webpage of the website. Tap the option 'Solution' and then select the 'Buy now option.

Step 3 Set up the Too

Now, we have to download and install the app on the targeted device. The installation will only consume two to three minutes. 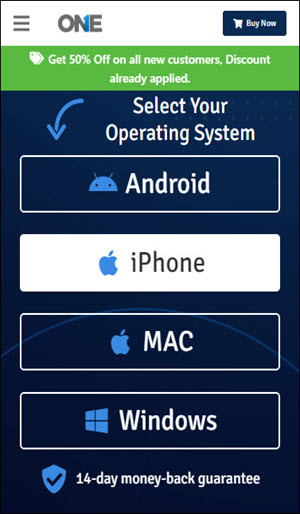 By using credentials, we have to gain access to the dashboard. At the last, we have to activate the features of the app and then we can start our further processing. 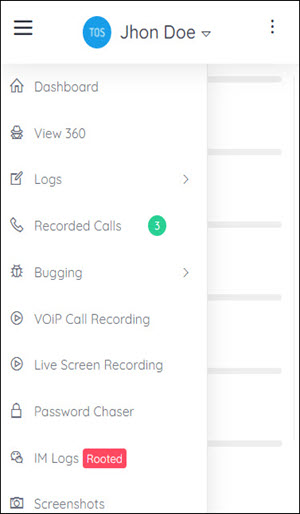 The interface of this tool is not very simple for the common person as compared to competitors. A complex procedure is required to follow in order to use this tool.

3. Why Is Spylix a Better Option Than TheOneSpy?

In the United States, tracking other people without their consent is illegal since it infringes on their privacy. In the United States and most European countries, however, surveillance is permissible in two situations: 1ts: After informing and obtaining their consent, you have the right to monitor another person.2nd: You can also lawfully keep an eye on your minor without them knowing.We urge that you look into any potential legal difficulties in your state before you start using TheOneSpy.

How does TheOneSpy process?

The entire work of this tool is not as difficult but only contains some simple steps. We can easily examine someone else's device by just installing the app on the device and then complete details about the working of the device owner will be shown to us on the web portal.

Spylix also offers the same process as TheOneSpy does, we have to install the app on the targeted device. We will be able to view the data about the device on the web portal provided to us by the web browser. Hence, both tools almost support the same functioning.

Is it possible to monitor more than one device?

Is the use of TheOneSpy legal or not?

The confusion of whether TheOneSy is illegal or not is still in some minds. But we are going to make it clear that this tool was only developed for positive working like to keep check and balance on children and employees etc.

Similarly, Spylix was also introduced for helping the parents and to increase the productivity of a business. Hence, we can use both of the tools without any kind of fear or worry.

Is TheOneSpy detectable or not?

As we have mentioned above, TheOneSpy is not detectable hence the targeted person will never be able to know about it. The majority of people hesitate from using spying apps just because of the fear of getting caught by the target person.

If we talk about Spylix then we will come to know that it is also undetectable and we will never be caught by the particular person. When we install the app then we will be asked whether we want to show the app on the homepage or not.

What type of information can I get using TheOneSpy?

Once we successfully installed the app on the targeted device then we can easily examine the whole working on the targeted device on the TheOneSpy dashboard. We can get data about call logs, incoming or outgoing messages, social media accounts, and the location of the device. Spylix also provides the same data as TheOneSoy does. We can also view and record the live work on the device easily.

Present world requires spy applications due to a variety of reasons. The world is growing in digitalization and it is important that parents must have a look at their children and the business community to keep an eye on their workers. Another pathetic thing is that relationships are getting more fragile in the present era.

TheOneSpy is providing a helping hand in such situations and provides a person with a spying tool that can work in different situations. All the minor, as well as major details related to this tool, are provided in the above TheOneSpy reviews.